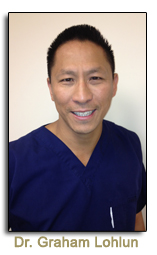 “Dr. Graham Lohlun is a well-known and respected physician in Edmonton with over 14 years of practice in emergency medicine, obstetrics and anaesthetics. He has made infant circumcision a major focus of his practice.

After conducting extensive research of the various surgical approaches and anaesthetic (pain control) protocols available today, Dr. Lohlun found one physician in Canada who had dedicated most of his professional career to focus on finding and researching what he considers the quickest, safest and least uncomfortable circumcision for infants. He found that doctor and decided to study his methods carefully and bring that method to Edmonton. The technique and methodology is called the “Pollock Technique” developed by Dr. Neil Pollock in Vancouver who has demonstrated the safety of this method and has come as close to anyone in perfecting a virtually painless 30-second technique over the course of him doing 35,000 circumcisions over 20 years. Dr. Lohlun came across Dr. Pollock’s techniques and went to Vancouver and entered his course where he worked intensively with Dr. Pollock under his careful supervision first working on doing hundreds of surgeries on models and then graduating to work on patients and now has brought this 30-second, virtually painless technique to Edmonton.”

Dr. Lohlun’s website is nearly identical to Dr. Neil Pollock’s, whom Lohlun consider’s his mentor. We’ve listed Dr. Pollock previously, which you can see here. You can compare the information given by both, but unfortunately, the information about risks is incomplete, so you can read that here.